The City of Florence and the Accademia delle Arti del Disegno of Florence, in collaboration with CAMNES – Centre for Ancient Mediterranean and Near Easter Studies of Florence and other national and international institutions, have decided to create an initiative in support of the UNESCO social media campaign #Unite4Heritage for the defence of heritage in danger, which is based on a series of events/meetings which will take place in Florence between December 2015 and December 2016.

The concept and the initiative coordination has been led by Carlo Francini, head of the UNESCO Office of the Municipality of Florence, in collaboration with Giulia Coco and Enrico Sartoni of the Accademia delle Arti del Disegno, and Stefano Valentini, CAMNES.

THE FIRST EVENT of the INITIATIVE: Workshop-exhibition “Florence 1815. The return of the Venus”

Considering the historical perspective, the first event of this initiative has been inspired by the celebration of exactly 200 years to the return to Florence of the artworks stolen by Napoleon Bonaparte between 1799 and 1813. Thus, from Monday, December 21, the Accademia delle Arti del Disegno of Florence hosted a workshop-exhibition, called “Florence 1815. The return of the Venus”, and a series of public events dedicated to the threats and the endangered heritage in times of conflict. This has the aim of illustrating and raising public awareness on an issue, well-known among scholars and specialists, but less-known among the community.

The dramatic paintings and sculptures looting from Palazzo Pitti, Uffizi Gallery and some convents, and their repatriation on Decemeber 27, 1815 – thanks to the work of the academics Giovanni Degli Alessandri and Pietro Benvenuti – was remembered during the conference of the 21 December, held by Chiara Pasquinelli and Gabriele Paolini, and during the workshop-exhibition at the exhibition hall of Palazzo de’ Beccai.

The workshop-exhibition investigated and rebuilt, through documents, works and educational means, the complex requisitions events led by the French army and by Dominique Vivant Denon, director of the Musée Napoleon. The workshop payed a particular attention to the Medici Venus in the Uffizi, icon of the stolen artistic heritage of Tuscany, which has been illustrated though a rich iconography.

The ancient statue “Medici Venus”, craved by Napoleon for completing the wing of his Musée related to ancient sculpture, and taken by fraud by the Frenchs in 1802, represents the emblem of the risks to which cultural heritage is constantly subject especially during particular historical time periods.

In January other conferences, concerning the history of Florence during Napoleon time, were planned. During these conferences, there was the interventions of scholars and specialists such Giovanni Cipriani, Francesco Vossilla, Liletta Fornasari and Antonella Gioli; the figures of Giovanni Degli Alessandri and Pietro Benvenuti ws deepen; and there was the recitating of sonnets and odes, composed in 1816 on the occasion of the art works return to Florence. The initiative ended on January 31, 2016. 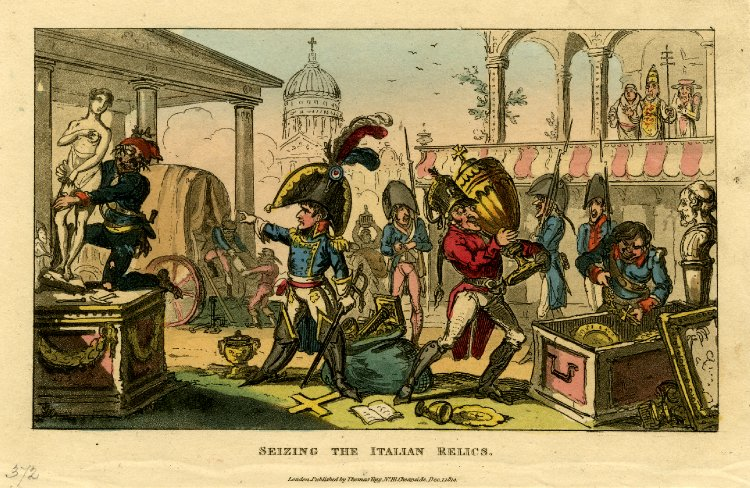