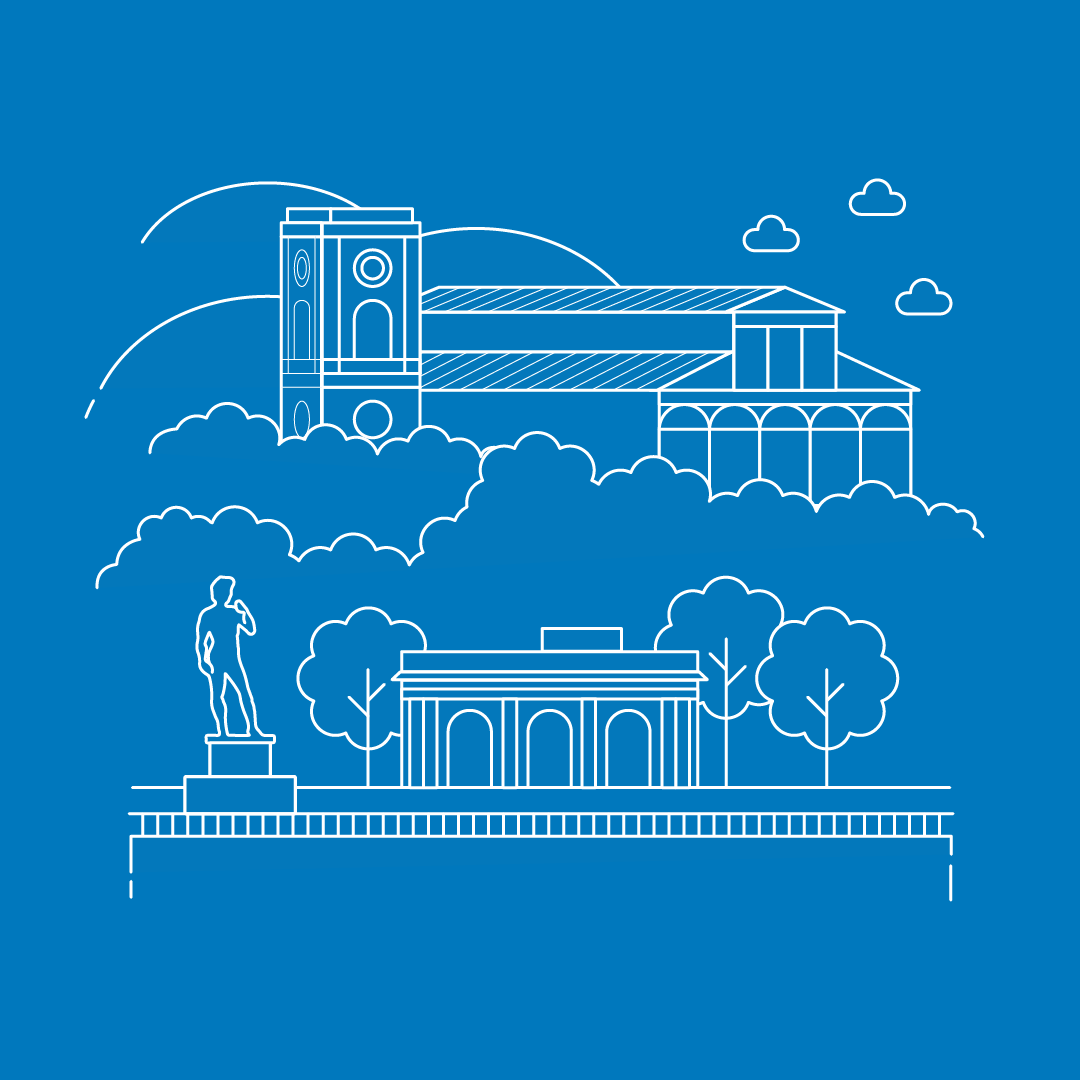 Why Florence is World Heritage

Florence was built on the site of an Etruscan settlement and the later ancient Roman colony of Florentia (founded in 59 BC). This Tuscan city became a symbol of the Renaissance during the early Medici period (between the 15th and the 16th centuries), reaching extraordinary levels of economic and cultural development. The present historic centre covers 505 ha and is bounded by the remains of the city’s 14th-century walls. These walls are represented by surviving gates, towers, and the two Medici strongholds: that of Saint John the Baptist in the north, popularly known as “da Basso”, and the Fort of San Giorgio del Belvedere located amongst the hills of the south side. The Arno River runs east and west through the city and a series of bridges connects its two banks including Ponte Vecchio and Ponte Santa Trinita.

Seven hundred years of cultural and artistic blooming are tangible today in the 14th-century Cathedral of Santa Maria del Fiore, the Church of Santa Croce, the Palazzo Vecchio, the Uffizi gallery, and the Palazzo Pitti. The city’s history is further evident in the artistic works of great masters such as Giotto, Brunelleschi, Botticelli and Michelangelo.

The Historic Centre of Florence can be perceived as a unique social and urban achievement, the result of persistent and long-lasting creativity, which includes museums, churches, buildings and artworks of immeasurable worth. Florence had an overwhelming influence on the development of architecture and the fine arts, first in Italy, and then in Europe. It is within the context of Florence that the concept of the Renaissance came to be. This heritage bestows upon Florence unique historical and aesthetic qualities.

Criterion (i): The urban complex of Florence is in itself a unique artistic realization, an absolute chef-d’œuvre, the fruit of continuous creation over more than six centuries. In addition to its museums (the Archaeological Museum, Uffizi, Bargello, Pitti, Galleria dell’Accademia), the greatest concentration of universally renowned works of art in the world is found here – the Cathedral of Santa Maria del Fiore, the Baptistery and the Campanile of Giotto, Piazza della Signoria dominated by Palazzo Vecchio and the Palazzo Uffizi, San Lorenzo, Santa Maria Novella, Santa Croce and the Pazzi chapel, Santo Spirito, San Miniato, and the Convent of San Marco which houses paintings of Fra Angelico.

Criterion (ii): Since the Quattrocento, Florence has exerted a predominant influence on the development of architecture and the monumental arts – first in Italy, and throughout Europe: the artistic principles of the Renaissance were defined there from the beginning of the 15th century by Brunelleschi, Donatello and Masaccio. It was in the Florentine milieu that two universal geniuses of the arts – Leonardo da Vinci and Michelangelo – were formed and asserted.

Criterion (iii): The Historic Centre of Florence attests in an exceptional manner, and by its unique coherence, to its power as a merchant-city of the Middle Ages and of the Renaissance. From its past, Florence had preserved entire streets, fortified palaces (Palazzo Spini, Palazzo del Podestà, Palazzo della Signoria), lodges (Loggia del Bigallo, Loggia dei Lanzi, Loggia degli Innocenti and del Mercato Nuovo), fountains, a marvellous 14th-century bridge lined with shops, the Ponte Vecchio. Various trades, organized into prosperous arts have left several monuments such as the Or San Michele.

Criterion (iv): Florence, a first-rate economic and political power in Europe from the 14th to the 17th century, was covered during that period with prestigious buildings which translated the munificence of the bankers and the princes: Palazzo Rucellai, Palazzo Strozzi, Palazzo Gondi, Palazzo Riccardi-Medici, Palazzo Pandolfini, Palazzo Pitti and the Boboli Gardens – as well as the sacristy of San Lorenzo, the funerary chapel of the Medicis, and the Biblioteca Laurenziana and others.

Criterion (vi): Florence is materially associated with events of universal importance. It was in the milieu of the Neo-Platonic Academia that the concept of the Renaissance was forged. Florence is the birthplace of modern humanism inspired by Landino, Marsilio Ficino, Pico della Mirandola and others.

The Historic Centre of Florence comprises all the elements necessary to express its Outstanding Universal Value. Surrounded by Arnolfian walls that date to the 14th century, the city includes the “quadrilatero romano,” which is made up of the present Piazza della Repubblica, the narrow, cobblestone streets of the medieval city, and the Renaissance city.

The urban environment of the historic centre remains almost untouched and the surrounding hills provide a perfect harmonious backdrop. This landscape maintains its Tuscan features, adding to its value.

Many of the threats to the historic centre relate to the impact of mass tourism, such as urban traffic air pollution, and of the decreasing number of residents. Natural disasters, specifically the risk of floods, have been identified as a threat to the cultural heritage and landscape. The 2006 Management Plan addresses this concern by defining emergency measures to be taken in the case of flooding.

The setting of Florence, surrounded by the Tuscan hills and bisected by the Arno River, has remained unchanged throughout the centuries. Florentines, aware of their own architectural past, have been able to preserve original building techniques with traditional building materials such as “pietra forte”, “pietra serena”, plasterwork, and frescoes. The Historic Centre of Florence has safeguarded its distinguishing characteristics, both in terms of building volume and decorations. The city has respected its medieval roots such as its urban form with narrow alleyways, and its Renaissance identity, exemplified by Palazzo Pitti’s imposing structure. These values are still appreciable within the historic centre, notwithstanding the 19th-century transformations undertaken during the period in which Florence served as the capital of Italy.

Unique Florentine handicraft and traditional shops in the historic centre are a concrete testimonial to the local past. Thus, they guarantee continuity for an outstanding tradition perpetuating the historical image of the city.

The components of the property within its 532 ha boundary are under various private, religious, and public ownership and subject to a number of measures for their protection. National provisions provide for the protection and preservation of cultural heritage (D.lgs 42/2004), which regulates on behalf of the “Ministero dei Beni e delle Attività Culturali e del Turismo” all actions that may affect the cultural heritage of the site.

Since 2006, the Historic Centre of Florence has a Management Plan in place naming the Municipality of Florence as the party responsible for the World Heritage property.

Moreover, within the city’s Master Plan, Florence has put in place a tool for urban planning which identifies the historic centre as a place of cultural and environmental concern. In this area, only conservation and restoration practices are put into action. In particular the Structural Plan outlines the strategies and innovations identified for the city’s future: it foresees an improvement to living conditions for residents, improvements to tourism, and initiatives to increase awareness of the historic centre as a World Heritage property. Associated with this initiative is a building policy which controls activities in the historic centre.

The Management Plan works to safeguard and conserve the urban structure and to maintain and increase the relationship between the traditional social-economic practices and the cultural heritage of the city.

The process of identification of the values and attributes of the Historic Centre of Florence started from the need to respond to Recommendation No. 5 of the UNESCO/ICOMOS Advisory Mission held in Florence in 2017, which suggested the identification of how the Outstanding Universal Value is expressed through the physical and social fabric of the site, defining its attributes. Given the lack of guidelines from international bodies, a path was developed specifically for the Historic Centre of Florence with six main steps to arrive at the definition of values and attributes:

The data, information and knowledge acquired in the development of the Table were mapped on geographic information system to visually perceive the distribution of specific attributes throughout the territory.

Subsequently, in the framework of the project “Florence Heritage Data System“, these attributes were integrated within a database system to optimise the interaction with the results of other studies and research related to the management of the World Heritage Site.

For each specific attribute, a research was carried out for the relevant file drawn up by the Istituto Centrale per il Catalogo e la Documentazione (ICCD), the body responsible for the definition of the procedures and tools for cataloguing the archaeological, architectural, landscape, historical, artistic and demo-ethno-anthropological heritage. In addition, the identification of OUV values and attributes, and in particular the development of the Table, proved to be of primary importance for the application of the Heritage Impact Assessment on some cases of development projects in the Florentine territory.