Hidden Florence: get to know the culture of the city at the time of so the De Medici

Hidden Florence is a free App in the English that allows the user to discover the city of the Renaissance through the eyes of a series of historical characters set in the historical period of Cosimo I. By linking unusual itineraries and little-visited places of the city to the everyday life of the Florentines of the past, this App accompanies the user to discover characters from the lesser-known past and alternative places in the Historic Centre of Florence.

Among the key points of the Action Plan of the Management Plan of the Historic Centre of Florence, approved by the City Council on January 19, 2016, there is the recognition of the need to encourage the “decentralization of tourist flows” on “places less visited and known” (page 81). In dialogue with the UNESCO Office of the Municipality of Florence, the Hidden Florence project proposes a series of cultural itineraries that move away from the city centre and the most visited museums and monuments, proposing instead to bring users closer to lesser-known but equally important realities of the social and material history of the city. The first results of an analysis of the data of the use of the App indicate not only a high rate of acceptance of the users (about 85%) but also the effectiveness of these tools in redirecting the movement of the intelligent tourist, through informed storytelling and a playful approach to navigation of the city. Further research is underway, which will analyze in greater detail how new technologies can modify tourist flows so that the quality cultural offer can act in favor of the priorities indicated in the Management Plan.

The App allows you to get closer to the city and the daily life at the time of Cosimo I de’ Medici. The main interface uses the map drawn in very high resolution by Stefano Buonsignori, cosmographer of the Duke in charge of creating the first detailed map of the city within the walls, given to the press in 1584. We geo-read the map of Buonsignori so that it fits perfectly with today’s road network, so as to be able to geolocalize the user with the usual blue “beacon” known from the main applications, such as Apple and Google Maps. The system thus makes an augmented reality, where you walk in the city of the present, using a map created for Duke Cosimo, following a series of routes in search of statues, tabernacles, squares, palaces, and houses.

The guiding characters are as follows:

Cosimo: Master of Florence (1459). First citizen or godfather? Cosimo de’ Medici takes you through the city that has spent a lifetime trying to make it’s own.

John: Neighbourhood World/People and Politics (1490). Discover the environment and a very different point of view in the centre of Florence with Giovanni, an art of wool worker, who accompanies you in the workplace, but also in his neighborhood of S. Ambrogio.

Niccolosa: Saints and Sinners (1492). Visit the places of faith of the city with Niccolosa Alessandri, in the days immediately behind the death of Lorenzo the Magnificent, in which the city faces an uncertain future.

Marietta: City of Women (1561). Follow in Marietta’s footsteps, in a journey that follows the course of her life, from the orphanage of the Innocents to becoming a silk weaver.

Hercules: Crime and Punishment (1566). From the torture room to the gallows, Hercules will show you how justice worked in the city of the Renaissance.

All the characters are animated by the voices of professional actors, including James Faulkner (Game of Thrones, Da Vinci’s Demons) who plays Cosimo de’ Medici. In every place, you visit you will find further explanations by scholars through the ‘Discover More’ function, which you can deepen by following the links to the pages of the site Hidden Florence.

Hidden Florence started with a prototype in 2014, with only the character of John. This new App was written by an international team of scholars of the Italian Renaissance and is a collaboration between the universities of Exeter, Cambridge, and Toronto.

Professor Fabrizio Nevola (University of Exeter) is in charge of the project and explains: “Seeing Hidden Florence grow through a series of important collaborations between fellow scholars, museums and cultural realities in Florence and elsewhere has been a real pleasure. We were able to put in the hands of the general public a series of stories little known and told, strengthening the cultural offer of this extraordinary city. Using the most advanced technologies, we present the most up-to-date research on gender studies, social classes, and power, in a way that is accessible to all”.

Partners in the Hidden Florence project are the National Gallery (London), the Museum Pole of Tuscany and the Florence World Heritage Site (UNESCO). The App and the project were funded by the Arts & Humanities Research Council (UK) through the University of Exeter and is produced by the company Calvium Ltd. 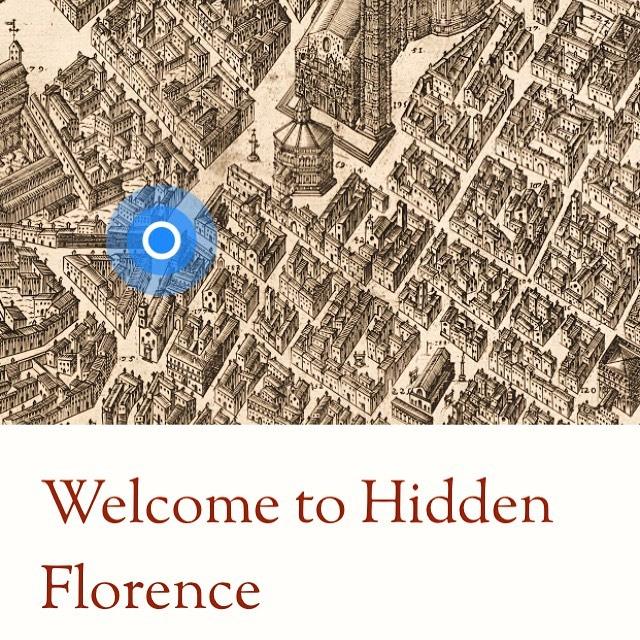