THE MEMORY OF THE GREAT WAR IN FLORENCE: GUIDED TOURS AND MEETINGS IN THE DISTRICTS OF FLORENCE IN MEMORY OF THOSE WHO FELL DURING THE FIRST WORLD WAR

In November 2018, guided tours began to get to know the places linked to the memory of those who fell during the First World War, which involved for the first time millions of people in their enthusiasm and fragility; but it is also the memory of family members, friends, fellow citizens lost during the conflict who find consolation and transfiguration in the plethora of monuments, sculptures, tombstones and plaques of the following years. Works located in squares and streets around the world, which in Florence – on the occasion of the anniversary of the Great War – you can discover and appreciate in their full historical and artistic value: the UNESCO Office of the City of Florence and MUS.E, thanks to the valuable and significant collaboration of the Opera di Santa Croce, offer the public a calendar of routes and events distributed throughout the city.

For Carlo Francini, head of the UNESCO Office of the City of Florence, “It is important to rediscover the awareness of these monuments, an integral part of the family and social history of Florence. UNESCO was founded at the end of the Second World War and has always linked its activities to the growth of the culture of peace: with this initiative, we do not want to celebrate the rhetoric of victory but to exalt the memory and the sacrifice and suffering of thousands of women and men in our city.

The project is developed according to two series of actions, guided tours in the city and appointments in the neighborhoods. Here is the complete program:

Paths in the city

Guided tours in the historic center to discover the monuments and traces of the Great War and its protagonists. The itinerary will start from Palazzo Vecchio and end in the city center at Santa Croce, the heart of the memory of the fallen Florentines. If the participants will be able to observe plaques, sculptures, and monuments created in memory of the event and its dead in the streets of the city, “in the impulse to find a higher meaning in the experience of war, something that would justify the sacrifice and irreparable loss” (George L. Mosse), the Monumental Complex of Santa Croce will be an important stop along the way, with a visit to the Chapel of the Italian Mother in the Basilica, to the Remembrance Park in the first cloister and to the underground Famedio designed by Alfredo Lensi.

Memories of the square

“Nothing in the world is more invisible than monuments. There is no doubt, however, that they are made to be seen, indeed, to attract attention; but at the same time they have something that makes them, so to speak, impermeable, and attention flows over them like drops of water…”. (Robert Musil). The appointments are centered on some monuments-symbols of the Great War in the city’s districts and offer the opportunity to look with new eyes at places and works that we pass by every day, regaining possession of artistic memories that make the city a true open-air museum and that intertwine the great History with the history, past and present, of each of us.

Participation is free of charge.

Reservation is required from the previous Monday.

Thanks to the city’s districts. 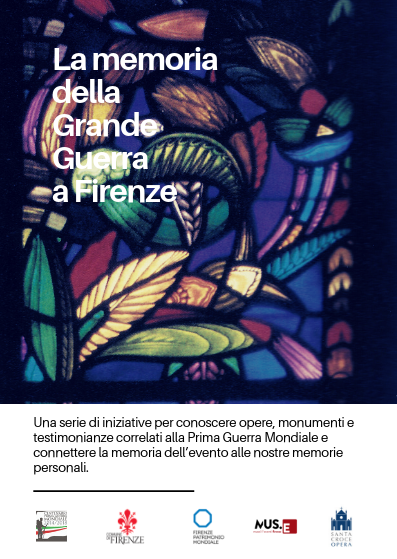 Agenda with the intiatives